Ukrainian Hackers Expose Over Two Thousand Emails from Putin’s Most Trusted Advisor — Investigation reveals that many of the emails are authentic.

Russian president Vladimir Putin is in the news for all the wrong reasons. Recently a database containing around 2,337 emails from one of the main and high-ranking advisors of Putin was released online. It is being speculated that a Ukraine-based hacking group is behind the email dump.

The advisor was identified to be Vladislav Surkov. Surkov was previously the deputy prime minister of Russia and currently he is serving as a personal advisor to Putin. The emails alleged Russian government of destabilizing Ukraine by backing and sponsoring the separatist forces in Ukraine, dubbed as Donetsk.

Surkov is known as the main architect of Russia’s current political structure and is nicknamed as “Grey Cardinal” of Kremlin since he is the one responsible for communication and managing relations with the Donetsk separatists. Furthermore, Surkov also manages relations with the breakaway regions of Georgia namely South Ossetia and Abkhazia. These two regions are being supported by Russia.

The hacker group, which has labeled itself as CyberHunta, is believed to be doing so to destabilize Kiev.

In the email cache dumped by CyberHunta, Putin’s administration is shown to be contacting with separatist forces based in East Ukraine. Some of the emails show lists of expenses and casualties by the separatist forces. Some emails even hint at the fact that Russian government approves of the government members of the Donetsk People’s Republic.

In one of the emails, plans of Putin administration to destabilize the Ukraine’s government in the near future (probably next month) are also under discussion. The plans are apparently an attempt to put an end to the Donbass, the standoff that exists in the entire Ukrainian region. This particular email has this subject line: “The plan of priority measures to destabilize the socio-political situation in Ukraine.”

The Associated Press’s Howard Amos and the research team at the Atlantic Council’s Digital Forensic Research Lab report that the email dump that is stored in a 1-gigabyte Outlook.Pst mailbox file, are actually authentic and the news isn’t a hoax.

According to Amos, he showed the emails to Svetlana Babaeva, a journalist in Russia, for identification purposes and Babaeva confirmed the emails were indeed sent to Surkov’s office by her. The researchers were able to confirm the email addresses and phone numbers available in the email cache as genuine. The email dump also contains scans of Surkov, his wife and children’s passports. 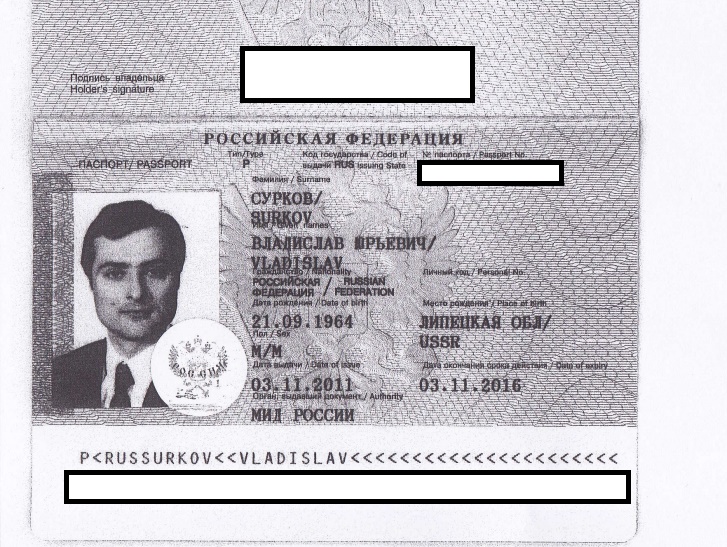 Screenshot of Vladislav Surkov passport among the dumped data

However, according to ArsTechnica, a spokesperson from Kremlin has claimed that these emails are illegitimate since Surkov never had an email address in all these years. Yet, the email address in question appears to be used by the assistants and staff members of Surkov. This claim is backed by the presence of reports from Surkov’s assistants in the dumped emails.

We can say that if this is a genuine breach of confidential data, then this would be a big blow for the Russian government as it is their first major hack attack targeted against an important political figure. It is very much possible that this hack is American government’s response to the Russian government’s alleged attempts to disrupt the US presidential election by leaking emails of the candidates and their staff.

The possibility of CIA sponsoring CyberHunt hacking group cannot be overlooked if we consider the timing and nature of the attack. It could very well be the much anticipated yet discreet Cyber-Response that was underway since alleged Russian hackers exposed emails from the Democratic National Committee servers followed by leaking of personal emails of John Podesta, Hillary Clinton’s presidential campaign chairperson and then the attacks on the State’s Election Official Systems.

It could also be possible that Ukrainian government is behind this attack but it is quite unlikely that Ukraine’s intelligence organization is involved in it.