Talking about Google Maps hack; this has to be the best one so far.

There’s evil. Then there’s pure evil. Few are decorated with praise of the latter but today there’s one guy that fully deserves it. We’re talking about Simon Weckert, an artist whose latest trick may have just led to a whole lot of traffic jams but only virtually – Google Maps to be precise.

In an experiment on Google Maps, he took 99 smartphones running the Google Maps app and then asked someone to roam them on the streets of Berlin while posting a video of the entire episode later on YouTube.

This resulted in Google thinking that there were a large number of people stuck in one area and hence flagged it as a traffic jam turning the color of the usual blue lines into red ones. This was also helped by the fact that since the cart was naturally slow, Google perceived the traffic as being congested.

What made this exploit possible is no rocket science though. In fact, any other layman could do the same unless Google makes some changes. Currently, it uses live data that is being generated by users including their speed and location to let them know of the condition of a specific route. Therefore, when it sees the location of so many users at the same place, its algorithm would divert incoming users to other routes helping them save time.

See: 8 Google Maps hidden places You are not allowed to see

We haven’t seen Google responding to the stunt as of yet but a senior Google Maps Engineering manager took to Twitter chiming in on the belief that it is indeed possible. Nonetheless, some remain skeptical because Simon hasn’t really detailed any of the methods he used to accomplish this apart from the wagon part.

I work for Google maps and I know quite a bit about how this works. I believe this is possible.


Watch as it happened:

On the other hand, it is important to remember that this isn’t the first time that this has happened. A similar incident was seen in 2018 when Pakistani locals started adding fake blockade marks in Google maps making users believe that the entire city was somehow blocked. Yet this wasn’t the case as it was found out later. Hence Google needs to start working on fixing this loophole to prevent any future problems arising out of such incidents. 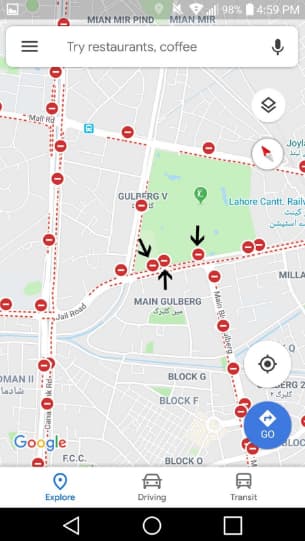